During assembly at the School of St Yared in Addis Ababa, Ethiopia. A school set up to help fight poverty through education.

Give an Ethiopian child living in extreme poverty an education, and you will change the course of their life and the lives of their families forever.

Eyes in all directions and only one face looking at me.

We’ve seen so many tragic images following the earthquakes, yet my memories are still of a vibrant, colourful country. I know that the relief efforts have been slow, especially to the remoter areas but from my contacts there I see optimism rather than despair.

Diwali, the festival of lights, spiritually signifies the victory of light over darkness. 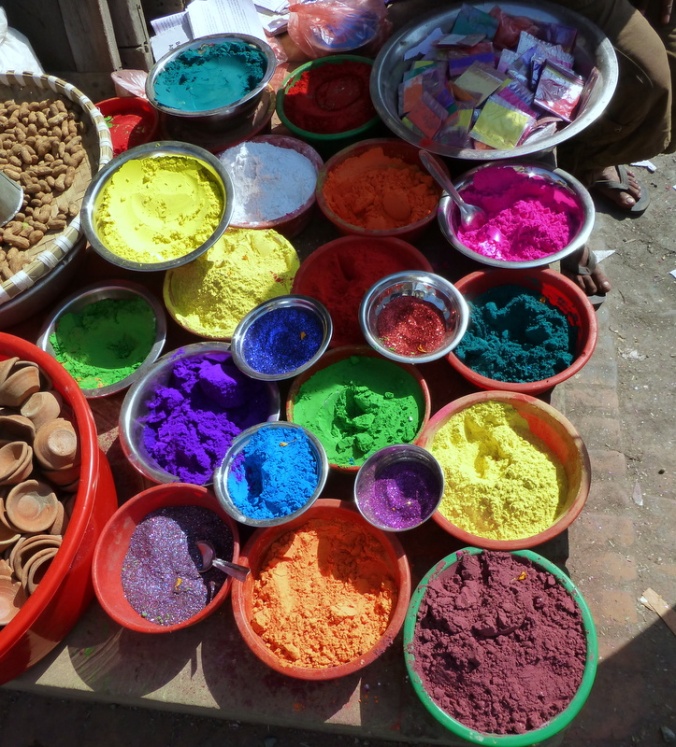 Rangoli or Kolam (mandalas) decorations for Diwali, are prepared from coloured flour or with flower petals. 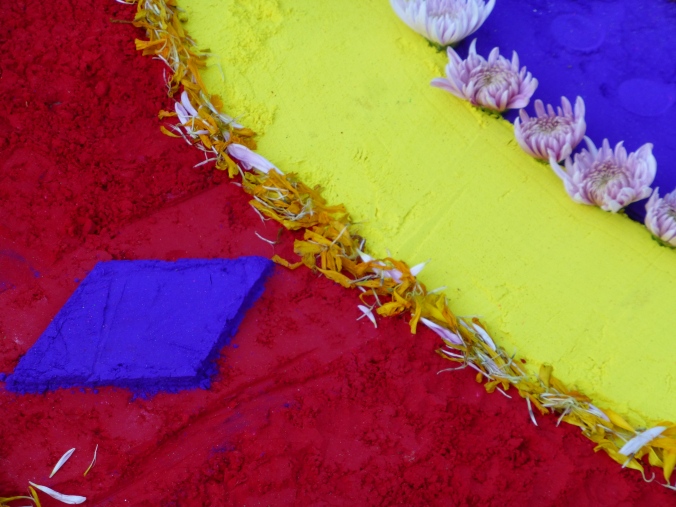 They are floor decorations placed near entrances and corridors to welcome the goddess Lakshmi and guests. 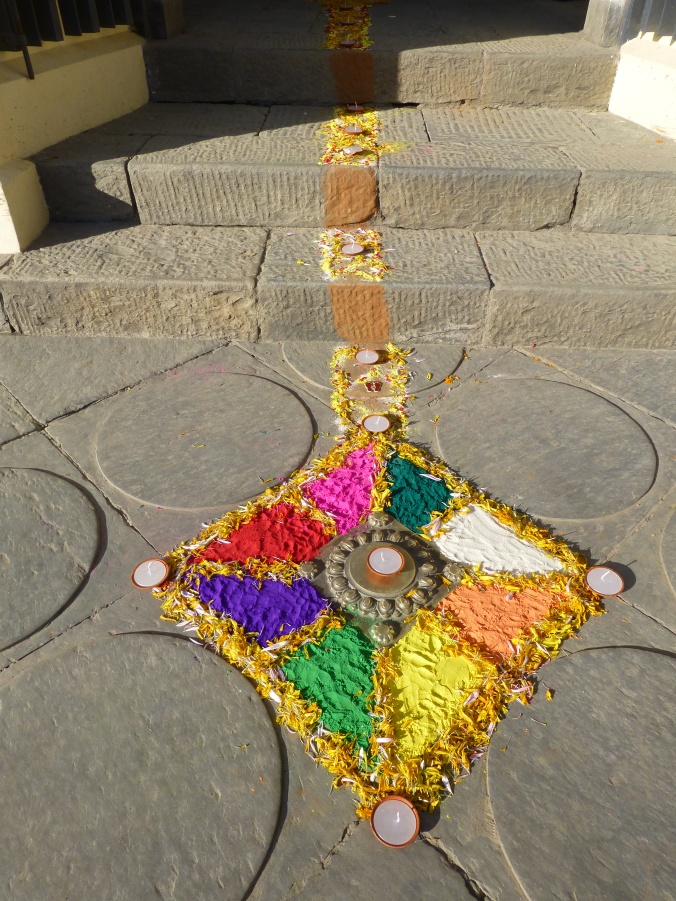 Let’s not forget this beautiful country that is still in great need of our support.

How you can help:

In May 2013, I was doing some voluntary work in Addis Ababa, Ethiopia.  I was working at the School of St Yared,  set up in 2009 to educate those children who would not normally get a chance, due to their poverty and family circumstances. The aim being that through education the poverty cycle can be broken and when these children become adults they can become leaders within their communities.

On my first visit to Ethiopia I didn’t manage to explore further than the edge of Addis city, so on this occasion I decided to go community trekking to western Meket in the mountains near Lalibela, one of Ethiopia’s most sacred sites. 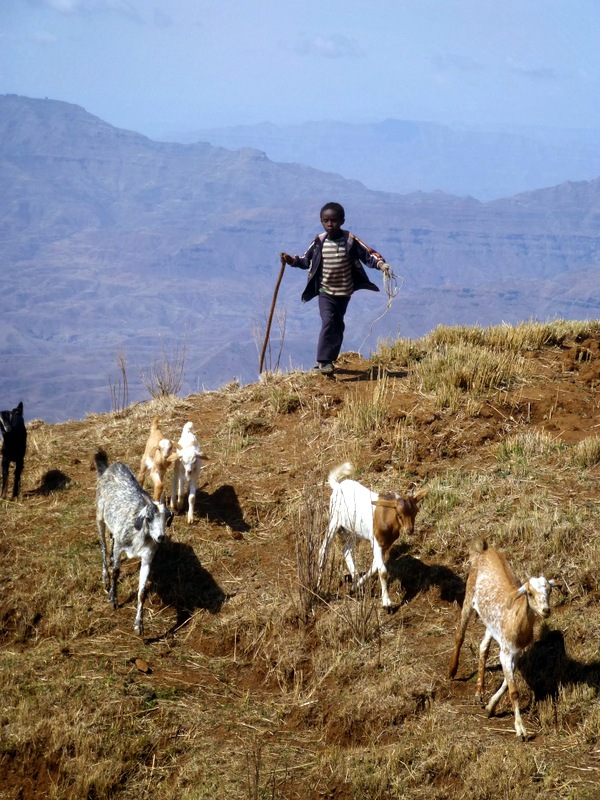 This photo, one of my favourites, was taken one morning just after breakfast, purely by chance when a small goat herder came skipping over the ridge.

He went past with an inquisitive smile and I wondered if he had ever had the chance to go to school or if this was the only life he knew, helping his family and roaming the mountainside with their goats in search of pasture.

We see, but do we really  see?

We acknowledge, but do we change anything? 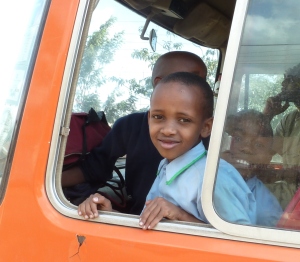 Squashed in the school bus

Excited voices and laughter met me as I hurried up to the school bus. I was late and they were all waiting. Once inside I saw all the seats were occupied by at least three, where there would normally be two. A couple of boys jumped up to let me sit next to Samuel, whose house I was to visit. There were still three of us squashed together. We left the school and once in Arusha we headed for the far side of town before we started dropping  children and teachers at regular intervals till it was our stop. Five of us got off.

One girl shyly grinned before disappearing into a small house that had a tiny shop in the front room selling an assortment of essentials; soap, water, tea, coffee, tomatoes, bananas, paraffin and an assortment of cans and bottles. A short distance further along the track another boy shouted excitedly for his mother to come out and meet their mzungu teacher. It wasn’t long before a few other heads popped out of  houses to see this white woman. We called out greetings, but as I had arranged transport back an hour later, I couldn’t hang around.

I followed the last three children up the track. It was getting steeper and narrower. There was no longer room for a car to pass, only bikes, motorbikes and those on foot. The red dirt felt gritty between my toes where it had crept into my sandals.

“Not far now,” Samuel said. “Just after the mango tree.” He grabbed my hand and hurried me forward. The other two children followed.

They pointed up the hillside. “Maybe Two kilometers. You see the mast?”

“Really?” I could see a mobile phone mast a long way up above. It looked a long way. I’d also noticed the houses became smaller and less robust the further we got from the main road. Some were mainly mud with tin roofs.

“This way.” A narrow path led between some banana palms.

We arrived at a humble brick house and were immediately greeted by all the family. The father had been working in the  shamba digging and planting and rushed off to wash and change. The sister was sent off to make tea.  The aunty who was visiting from the capital was brought in to talk to me, and Samuel’s grandmother appeared from the back of the house, stooped over a walking cane.

There was a large sofa and a couple of chairs around a small table.   A thermos of tea was formally brought in with two china tea cups and some plastic mugs. I was presented with a china cup and talked to the grandmother in my halting Kiswahili. They were so proud of their child that had been scooped from poverty to receive a ‘proper’education in that school that was becoming so well known that thousands  lined up each year to try to get one of the limited places that were offered to the brightest applicants.

I thought my visit was coming to an end, when a meal was placed in front of us. Beans, spinach and chapati. I was so humbled by this act of kindness. The had so little, yet they wanted to share.

After we had eaten, I  took some photos that I promised to send to them. They had never had any photos before. I excused myself, then ran down the hill to the bus that was waiting for me for the second time that day.

Samuel is not his real name. I was doing an unannounced home visit to check on where he was living. So many children try to get into the school, which only takes the brightest and poorest kids. Sometimes, despite rigorous checks upon entry, a few children get places from more affluent families who go to great lengths to get their children in.