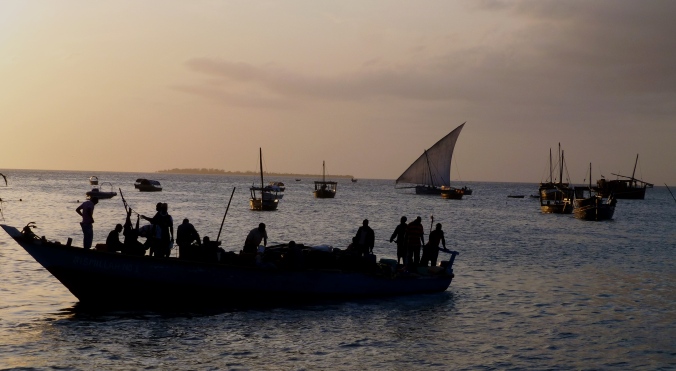 A dhow drifts out

On the evening breeze

Mum is busy cooking and I’m hungry. She hands me some peanuts. The grease speckles the brown paper bag and I know I can’t reach inside yet. I run to the living room to find Dad. A fold in the hallway rug trips me and I’m falling. My mouth hits the pipe of the radiator. Then there is pain and blood. Lots of blood. I start to scream.  Somehow I’m now lying with my head cradled in Mum’s lap in the back of the car. I’m vaguely aware Dad is driving fast, as crimson seeps into the lilac of Mum’s angora jumper mixed with snot and tears.

I take a big breath and pull the shirt on. Its coarseness makes me shudder and I quickly grab my tie and cardigan; both bottle green. I still feel the newness of my shirt an hour later. It distracts me from the monotone of the history teacher. I don’t know which I dislike more.

The red glow of the gas fire does little to heat the damp room, but we’re all warm and loud with alcohol. Someone has turned the music on loud. It’s Ian Drury. Sex and Drugs and Rock and Roll. I sing along. Val says, “I’m starving.”  Ash goes off to get the sliced bread and margarine from the kitchen. He then bends in front of the fire and slams some pieces of bread against the protective wire. Within minutes the room fills with the smell of burning toast.

Laughter drifts across the stream. The weekend and the heatwave has brought droves of people to the Yorkshire countryside. We’re lying on a patch of grass in the midst of the heather looking up at the hazy blue sky. Steve’s Mini Cooper S throws a lengthening shadow behind us. He has a cigarette between his lips and we’ve both got cans of warm beer. Even though our chatter is frivolous, I think foremost in both our minds is, should we or shouldn’t we? 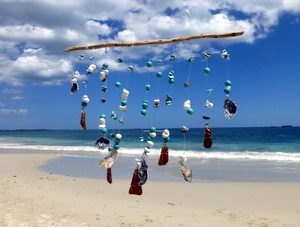 Dancing in the Seabreeze          Western Australia

What I like about mobiles is that when hung outside they are rarely stationary. They dance in the breeze, their form changes and light bounces off or through their surfaces.

It all started in 2007 when I spent a year on the island of Zanzibar. Weekends were often spent at one of the beautiful white beaches, swimming, relaxing and beachcombing. One day I sat with my daughter looking at our spoils and saw she had picked up some broken coral entwined in fishing line and tied it to a piece of driftwood. That was the beginning.

My passion of beachcombing, which I do almost every day, has led me to developing a very ‘small’ but fun business, Driftwood Elements. I sell on local markets, as I did this morning despite the thundery skies, and I also have an Etsy site. The site is a little bit bare at the moment as the markets have been successful 🙂

I think even if I was never to be published my notebooks would be a witness to my writing. More tangible than the digital word and more private in that they were never meant to be read by anyone other than me.

There were hardback books, soft books, large books, small books, exercise books and note pads. In the beginning I diarised and doodled, sometime I’d stick in a ticket or something meaningful – to me at least. Other times I’d try to draw something  that I had failed to describe in words or had been unable to record in a photograph. Fragments of the story of my life.

Even after our first computer it still felt good to fill a page with words, especially the private words only I wanted to bear witness to. Over the years it wasn’t just one computer in the household, but laptops and other devices appeared. My digital efforts increased as the pen lay dormant. But I was always drawn to a  beautiful notebook, I’d run my fingers over the blank page and feel the weight of quality paper.

Now I flit between both worlds. My writings are more capacious and based in fiction. The words often need rearranging, the pages change as the editing takes over and I find I need the speed of a computer. Those immediate thoughts or sparks of ideas I have to write down when I’m out and about, fill the small notebooks, leather-bound or fabric covered, chosen carefully for their beauty and size, that take turns to sit in my handbag. Sometimes these jottings are transferred to join the longer stories and manuscripts that build up on my computer, or they join the growing pile of memories and stories that line a drawer, a cupboard and a shelf of a bookcase.

In 1981 I made my first miso pate. I was working as the ‘cook’ in a new wine bar in Newcastle in the north of England and determined to have some vegetarian food on the menu. It soon became one of the most popular starters. I’d just returned from living in France and Belgium and cooking for a diplomatic family who ate a lot of red meat. Obviously too much for my system as I rarely ate it again afterwards. This was my initial foray into vegetarian food.

In the following years I became less of a meat-eater and more of a pescatarian. I started reading labels on the food that I bought, and with that knowledge I started to reduce the amount of processed food and foods with additives in my diet. I then spent three years in Tanzania during a time when processed foods were unheard of – and why would you even think about them when the markets were full of freshly grown produce and abundant seafoods from the oceans?

By the nineties I was primarily a vegetarian although I still ate fish and seafood. I was living in South East Asia and there was an abundance of fresh vegetables and amazing fruits, although not necessarily the ones I was used to. I remember amongst the many dinner parties that were so much a part of the expat lifestyle, being asked if it was possible to put on a vegetarian one that everyone would enjoy. How could I not take up the challenge?

It’s strange that when a new concept in eating is first embraced, those that choose to try out the ‘new’ food or style of preparing and eating the food will do so for various reasons – it’s healthier, it’s trendy, it’s what everyone is talking about etc etc. So to many Westerners vegetarianism was associated with ‘hippies’, regardless of the fact the millions of people around the world are vegetarian through not only dietary choice but also through poverty, religion or culture.

So when I had my vegetarian dinner party – which of course was a resounding success – I realised that for some of those present, they had never really had a vegetarian meal in their life, unless of course you can count baked beans on toast.

Now I’m into raw food and I really love kale. I can get more excited by a plate of kale chips than regular potato chips. The texture of zucchini pasta doesn’t bother me in the least, although I found it strange the first time I ate it. Yes, the smell of freshly baked bread still has me salivating, and I will still eat it smothered in butter, yet I find that I’m healthier eating a diet of mainly plant based foods. I used to think I needed the seafood to ensure I had enough protein in my diet, but the farming of salmon has questionable practice, the levels of mercury in some fish is exceedingly high and overfishing is turning into an environmental catastrophe for some species. 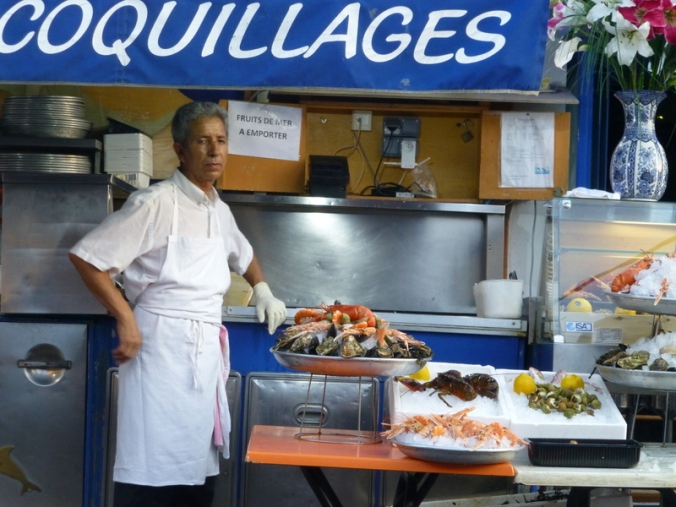 Food has always played a large part in my life. I love food. I love the social side of it and having never lived in poverty, I love that I can choose to buy what I want. I’m pleased that over the years it has become easier to buy organic and seasonal produce and it has become easier to go out for a vegetarian meal without being offered pasta or more pasta … I once asked why vegetarians were expected to survive without any protein, save a dusting of parmesan cheese – presuming they weren’t vegan – and the confused looks of those I asked gave me the answer: a lot of people don’t really think about what they are eating and what it contains.

The latest buzz word is ‘sugar’. For so many years people have been oblivious to how much sugar was actually in their diet … but that I will save for another post.